"This is the miracle that happens every time to those who really love; the more they give, the more they possess.â
-- Rainer Maria Rilke

Most of us know, deep down, that miracles are possible. Not only are they possible, but they are happening around us all the time. We've heard stories about spontaneous remissions of cancer, surprising awakenings from comas, people who can lift a heavy car off of someone else, and other amazing things.

What we tend to ignore is the simple fact that the ability to transform this world lies within each and every one of us. Each of us is a creator in this universe, whose very act of observation changes the Earth. Each of us is capable of healing not just other people, plants, and animals with our feelings of love and thoughts of well-being, but also the "non-living" things around us.

I recently had a discussion with my literary agent about my use of the phrase, "healing things". She disagreed with me that things could be healed, since they are after all, things.

"Yes, but I feel consciousness exists in everything, and that everything responds well to love," I attempted to explain to her.

My agent cut in with her brisk New York accent to repeat firmly, "Things aren't healed."

I confirmed that I knew what she was talking about by replying, "You mean things can be fixed, but not healed, according to the way most people see the world."

I was amazed by this conversation, because not too many years ago I was sure I would have shared her viewpoint. I'd been trained to see the world as an impartial observer by my physics classes at U.C. Berkeley... yet I'd secretly wondered how the revolutionary implications of quantum physics had gone unnoticed by the majority of my professors. My quantum physics classes thrilled me in a way my classical physics classes had never done, by showing me first-hand how it was possible and even necessary to "go by feel". Rather than certainties, quantum physics dealt with probabilities. Instead of being uninvolved observers in quantum physics lab experiments, quantum physics described how the observer's very act of observation caused things they observed to change around them. Rather than matter being all that mattered... there was quite obviously something deeper and more mysterious going on. Quantum particles separated by great distances are constantly affecting their twins non-locally -- so dependably and to such a degree that physicists and engineers are at this very moment working to design and build quantum computers to harness this "spooky action at a distance" (Albert Einstein's pet phrase for quantum non-locality).

In more recent years, my experiences with healing things have been very similar to my experiences healing people. In both cases, I sense energy imbalances. In both cases, by feeling my love for the person or thing to be healed and bringing healing energy in, I have been able to successfully coordinate reality shifts. Even with my recent wealth of experiences witnessing miraculous healings of people and things, I often forget to try energy healing first, since I was raised in 20th century American culture with it's belief in physical intervention being the best course of action. I often start out doing things the traditional American way, by taking broken equipment in to the repair shop... only to find later on that energy healing works to fix things that repair shops can't.

When my Epson color printer started printing splotchy bands of color on every page, I took it to a competent printer repair shop. I brought it back to the shop when the first repair didn't fix the problem, and when I came to retrieve it the second time, I was told by the technicians that my printer was beyond repair. They explained that the connections had been checked and cleaned, the ink had been replaced, the jets had been cleaned... in fact, every mechanical part of the system had been fully scrutinized and reviewed to the best of their ability. They recommended that my best course of action would be to purchase a replacement printer, and discard this one.

I returned home, feeling sad. I felt how much I loved my printer and how much I wished it was all better (but I forgot about energy healing). After a couple of days, I went out to buy and bring home a replacement for it. No sooner did I set the new color printer box down in the same room with my old printer, than I discovered my old printer was fully functional! This energy healing of my printer took place over a year ago now, and my printer has been working perfectly well ever since.

My experience healing my printer came to mind recently when I visited a friend who has a scanner, and asked her if she would scan a polaroid aura picture of me. I showed her the photo with its beautiful rainbow colors superimposed over me. 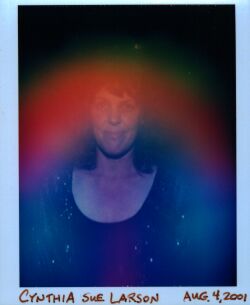 An aura photograph of Cynthia taken with an Aura Imaging camera,
scanned by a freshly healed scanner.


My friend admired the photo, looked a bit flustered and embarrassed, and replied, "My scanner isn't working, and hasn't been working for months now. Everything it scans comes out looking green. I've checked all the connections, and done everything I could think of, but it's still not working." She then showed me a scanned family photograph with smiling green people and a green background.

I toyed with the idea of joking with her about her Martian relatives, but thought the better of it in light of the seriousness of the situation. "I think your scanner can work, and I'll gladly help you heal it, if you want. There's nothing to lose, and if we heal it, you'll have a working scanner again!" I was happy to see her eyes brighten, and could see she was up for giving it a try.

I asked her if she could feel or see the energy around her scanner -- and told her that I saw a dark energy around it that felt heavy and thick as I moved my hand through it. I indicated for her to do the same, and she observed that the area around the scanner indeed felt very different than the surrounding areas. We then felt how much love we felt for the scanner, called with gratitude upon the healing spirit of the scanner (the "scanner angel") to assist us in healing it -- as I gave my friend a number of options for ways we could bring in healing energy. She selected my personal favorite, the "love blast", and we proceeded to clear out the sick energy and replace it with positive, healthy energy. I could feel the blast of shining love radiating from the scanner blowing all the dark stuff away, and we did a healing/cleansing on all of the connectors and cables before turning it on... and seeing it work... perfectly!

This article was originally published in 2002 for Planet Lightworker magazine, produced by New Earth Publications.