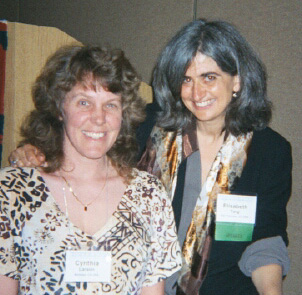 In the past thirty years, hundreds of distant healing studies have been conducted to help us better understand the connection between our thoughts and feelings and non-local effects in the physical world. Of these hundreds of studies, some stand out as statistically significant, well-designed, reproducible experiments. These landmark studies are confirming that people are able to influence the health and well-being of people being prayed for, even across great distances, and even when those doing the praying do not know the people they are praying for.

What is distant healing --
and why should we care?

Basically, distant healing has been defined as being a conscious, dedicated act of mentation attempting to benefit another person's physical or emotional well-being at a distance. Prayer and spiritual healing both fall under this definition, as do general "well-wishes" by those who insist they have absolutely no religious or spiritual beliefs whatsoever. Essentially, all belief systems are equally powerful at providing non-local healing, as we are beginning to see from the results of several remarkable new experiments. Our own health, as well as the health of those around us, and even the eco-systems we live within, all benefit from distant healing.

Cardiologist Randolph Byrd conducted a rigidly designed randomized, double-blind experiment in 1988 to determine the effects of prayer on patients in the Coronary Care Unit at San Francisco General Hospital over a ten-month period. A computer made the random assignments of which of the 383 newly-admitted patients involved in this study would be prayed-for, and which would not. The statistically significant findings of this study were that prayed-for patients were five times less likely to require antibiotics, three times less likely to develop pulmonary edema... and none of the prayed-for patients required endotracheal intubation (in which a tube is placed in the patient's throat) whereas twelve of the non-prayed-for patients required this procedure.

Byrd's remarkable findings might have been widely accepted when they were first reported, were it not for some rather sharp criticisms directed at the study participants (only born-again Christians were selected) and the lack of consistent directions given to the prayers about how they should pray (no directions at all had been given). Furthermore, the study could not confirm that those doing the praying actually prayed, nor could it tell anyone how experienced those doing the praying were at praying -- and some very serious ethical questions were raised about praying for people who feel morally opposed to prayer intervention and/or not praying for people who devoutly believe in the power of prayer to heal. Due to these shortcomings, many felt that Byrd's study was inconclusive.

In 1999, researchers from the Mid America Heart Institute at Saint Luke's Hospital in Kansas City, Missouri, set out to conduct a more scientifically valid version of the Byrd study. Researchers William Harris, Manohar Gowda, Jerry Kolb, Christopher Strychacz, James Vacek, Philip Jones, Alan Forker, James O'Keefe, and Ben McCallister designed a randomized, controlled, double-blind, prospective, parallel-group trial to determine whether remote intercessory prayer for 990 hospitalized coronary care unit (CCU) patients would reduce overall adverse affects. This time, the intercessors represented a variety of Christian traditions, with 35% listing their affiliations as non-denominational, 27% as Episcopalian, and the remainder as other Protestant groups or Roman Catholic. Intercessors were recruited no particular denomination by investigators via contacts in the local community for their experience in prayer, and were required to agree with the following statement, "I believe in God. I believe that He is personal and is concerned with individual lives. I further believe that He is responsive to prayers for healing made on behalf of the sick."

Researchers William Harris and his colleagues were careful to point out some of the factors that they were unable to control for in their prayer study:

"In evaluating the results of this trial, it is important to note
that we were most likely studying the effects of supplementary
intercessory prayer. Since at least 50% of patients admitted to
this hospital state that they have religious preference, it is
probable that many if not most patients in both groups were already
receiving intercessory and/or direct prayer from friends, family, and
clergy during their hospitalization. Thus, there is an unknowable and
uncontrollable (but presumed similar) level of 'background' prayer
being offered for patients in both groups; whatever impact that
group assignment had on healing was over and above any influence
background prayer may have had."

Another recent small-scale study involving the effects of intercessory prayer on 40 humans was conducted with Elisabeth Targ and several of her colleagues at San Francisco's California Pacific Medical Center, in conjunction with the Geraldine Brush Cancer Research Institute and UCSF. This randomized, double-blind study set out to determine the effects of distant healing on people suffering from advanced AIDS. With admirable attention to experimental detail, this study controlled for variation in severity and prognosis of different AIDS related illnesses, utilizing the Boston Health Study (BHS) Opportunistic Disease Score to measure the degree of AIDS-defining and secondary AIDS-related diseases. The 40 experienced distant healing practitioners in this study came from a wide variety of backgrounds and beliefs (including Christian, Jewish, Buddhist, Native American, and shamanic traditions as well as graduates of secular schools of bioenergetic and meditative healing). The distant healers (DH) were required to have had a minimum of five years regular ongoing healing practice, previous healing experience at a distance with at least ten patients, and previous healing experience with AIDS. These healers had an average of 17 years of experience and had treated an average of 106 patients at a distance. The prayer treatments continued for six months, over which the DH group required significantly fewer outpatient doctor visits, fewer hospitalizations, fewer days of hospitalization, fewer new AIDS defining diseases, and a lower illness severity level as defined by the BHS scale.

Clearly, distant healing researchers are honing in on addressing the concerns voiced by critics. In addition to these ground-breaking human prayer studies, there are literally hundreds of scientific studies that researchers have conducted with yeast, molds, sprouts, and other life forms that vividly demonstrate the significant difference that human thoughts and prayers have on the physical world. Because these studies are free from many of the ethical and "extraneous prayer" problems commonly found in human prayer experiments, they are likely to lead the way in helping us discover how consciousness changes the physical world.

Researchers at Spindrift have shown remarkable laboratory evidence that indicates that some people are naturally more proficient at producing non-local effects, and that non-directed prayer (where instead of a specific outcome, a general sense of what's best is intended) can produce extremely powerful results. Indeed, it's usually best for growing organisms to receive the non-directed form of prayer, rather than receive prayers to "grow HUGE", because non-directed prayers keep organisms in better balance.

William S. Harris. A Randomized, Controlled Trial of the Effects of Remote, Intercessory Prayer on Outcomes in Patients Admitted to the Coronary Care Unit; Archives of Internal Medicine; October 1999; 159:2273-2278

F. Sicher, E. Targ, D. Moore, and HS Smith. A Randomized Double-Blind Study of the Effect of Distant Healing in a Population with Advanced AIDS - Report of a Small Scale Study; Western Journal of Medicine; December 1998; 169:356-363