How to Host a Spoon-Bending Party
by Cynthia Sue Larson
July 22, 2000 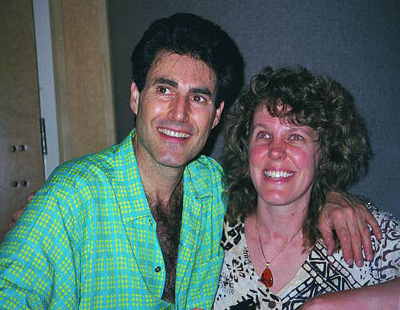 In the fall of 1999, I went to see Uri Geller give a talk at a Learning Annex class in San Francisco. I was delighted when Uri demonstrated how he bends spoons with one of the spoons I had hopefully brought along with me! My spoon was a solid one, stamped with the words "ONEIDACRAFT STAINLESS" on the back side of the handle. There was nothing unusual or weak about this spoon, and although I didn't attempt to bend it forcibly, it seemed quite sturdy to me.

Uri held my spoon up in front of him as he stood facing the audience of some hundred people in the room, holding my spoon in one hand by the cup part as he gently stroked the UPPER side of the handle with his free hand. He asked all of us in the audience to shout "BEND!" at the spoon, and to visualize the spoon bending. We did this, and within seconds, we could see the spoon's handle beginning to move UPWARDS towards Uri's still gently moving hand!

Uri also sprouted some seeds in the palm of his hand, which grew at an astonishing rate with little green tendrils popping out of the seeds within moments of the audience shouting, "GROW!"

These sights were so inspirational that I decided to organize a small spoon bending party at my home, to see if we could bend a few spoons.


The first step in hosting a spoon bending party is to decide who you'll invite. Make sure you invite people you truly love to have around, and people who will at least be open-minded about the idea of bending spoons! I invited several close friends and their children. I'd heard that children are often more open to the experience of bending spoons, and have an easier time achieving good results. Be sure to practice bending spoons away from judgemental people first. This feat takes an open mind and good friends to achieve, and while it isn't something that can be taught from any typical school lesson plans or books, it just takes practice and time.


Jack Houck has stated that in his experience of hosting more than 100 spoon bending parties, it helps to create an atmosphere of excitement and emotional arousal. It's also helpful to have at least 12 people at the party, and it's really wonderful to have lots of kids! Laughter, happy talking, and lots of excitement all contribute to making your spoon bending party a success.


(3) Select Utensils that "Want" to Bend


Be sure to have a big selection of utensils to choose from that are OK to bend. You'll need the large assortment because not all utensils "want" to bend! One of my friends had brought along a whole basket full of spoons and forks for us to choose from, and we each took a few moments to select utensils that seemed "right" for us. This step turns out to be a very important one -- I've since learned that other spoon bending party hosts, such as Jack Houck, insist that people take time to ask the fork or spoon, "Will you bend for me?" If you don't feel that the answer will be yes, you need to pick something more cooperative. If you get a positive feeling about your chosen spoon, it's best to do what I saw Uri Geller do, and immediately hold the spoon vertically while shouting, "Bend! Bend!" Once intimidated by being shouted at, the spoon can be rubbed gently between your fingers, and pretty soon it will bend.


(4) Change the Focus of Your Attention


At our spoon bending party, most of us felt pretty self-conscious and took the spoon bending very seriously (instead of laughing and talking noisily and cheerfully as recommended). We didn't shout at our spoons and forks to intimidate them (or to loosen ourselves up), yet while we took turns focusing on one person's spoon or fork bending attempt at a time we suddenly noticed that my daughter was quietly sitting with a fork on top of her right wrist as she gazed off in the distance... and her fork was drooping down as if it was made of soft rubber! It seemed to melt down to mold itself to the shape of her wrist as we watched in amazement. She wasn't even paying any attention to her fork, and didn't believe us at first when we exclaimed, "Your fork is bending!!!"

We're planning to have another spoon bending party, and THIS time we'll make sure we make a lot more noise and laugh and shout a lot more! It's been said that spoon bending requires "relaxed inattention", in the sense that it's better to not get too preoccupied with worrying about whether your spoon is bending. People who are most successful at this say that it works when they're not even paying any attention... that's when your spoon is most likely to bend! You have to first try to get it to bend, and then change the focus of your attention to something completely different, while continuing to touch or stroke it.

If you think about quantum behavior on a macro-scale, this business of "relaxed inattention" starts to make some sense. It's a lot like knowing that if you LOOK for a quantum particle, you'll see one... and if you aren't looking, those "particles" behave like waves.